Sebastian Inlet 1/15/18
Dear friends, thanks for your patience, at least from most of you...We have experienced a computer disaster and had to start from the beginning and redo last week's blog. We have divided this post into two sections, so if we lose one, it will only be half a disaster... : ( 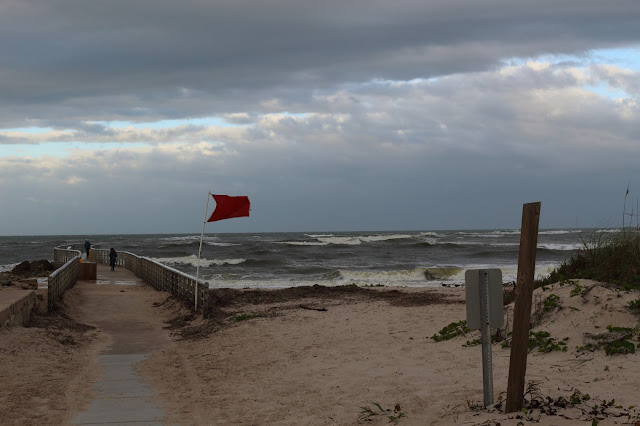 We arrived at Sebastian Inlet State Park on a blustery day where the RED flag was flying
on the beach meaning "High hazard, high surf and/or strong currents".
A couple of days later the PURPLE flag is added meaning, "Dangerous marine life".
And what happens next? Welcome to the pro-surfing competition! “Let’s be safe out there!”

We visited NASA's Kennedy Space Center at Cape Canaveral which has changed quite a bit since we visited in 1973. Our tax dollars do not support the center and that is reflected in the price of tickets for two seniors $98 plus $10 parking. In spite of the cost, we really enjoyed our visit, spending our time on a bus tour of the complex and extended visiting time at the Apollo/Saturn V Center, where a re-enactment of the first moon landing using the original command center, voice recordings and video was thrilling. We also viewed the Space Shuttle Atlantis including a shuttle launch experience, Journey to Mars and  Science on a Sphere. All were well done. It really helped us recall the era of early manned missions and exploration. Although the complex was not crowded on the day we visited, there were 1.7 million visitors in 2016.

Posted by casita aventuras at 3:47 PM