Since being here at Fort Pickens, we have seen and heard a number of "roaring" solo jets flying by at  low altitudes. Well, the National Navy Aviation Museum on the Naval Air Station at Pensacola, Florida is right across the bay, and  closer by kayak than it is car...if we had kayaks.  Both of us really enjoyed the the tour we took of ONLY the first floor of the main building. I really wouldn't mind going back for another tour. The tour guide is what made it for us.

I don't think we have a photo of this, but there were four Blue Angels Skyhawks suspended in a diamond formation in one of the foyers....and what's wrong with this? They are NOT as close as they would be in an actual flight formation...I'm not sure if that makes me want to see them fly or not want to see them fly.

And since we can not give a full summary of today's tour we will choose a couple of items on which to comment: 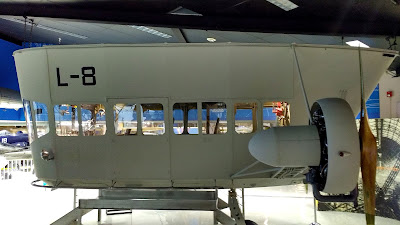 In 1942, Blimp L-8 based out of San Francisco was looking for submarines off the coast. The last radio contact said the crew of two men was descending to check out an oil slick on the water. Area ships reported they saw the blimp descend and then ascend. The blimp then returned to land, seemingly blown toward the shore and got caught up in some poles and wires. The two crew were not on board and were never seen again. They were wearing flotation devices which were missing from the blimp. 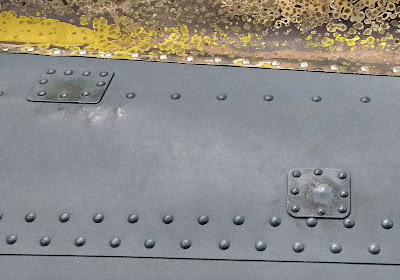 The Douglas SBD Dauntless on display was a naval scout and dive bomber. It survived Pearl Harbor, and the Battle of Midway, where it ended up with 200 bullet holes that were patched up, but it could not survive a student naval pilot.  It ended up dumped in Lake Michigan and was resurfaced and restored for
the exhibit.